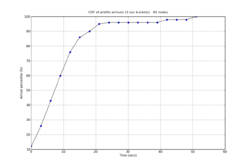 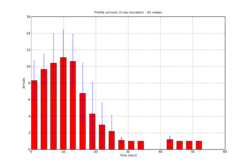 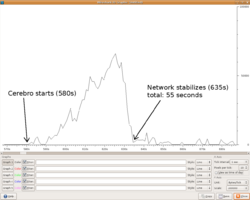 Here are the latest results from Cerebro's (http://cerebro.mit.edu) scaling properties. A 65-node testbed was used (703, Q2D14). The NetworkManager had to be disabled in order to stabilize the behavior of each XO's wireless interface. Unfortunately, the difficulty and time necessary to manage increasingly more nodes is linear (given that the NetoworkManager is disabled ;-), but increases steeply.

Cerebro was started on all 65 laptops almost at the same time. We attempted to emulate the "65 children turn on their laptops in class at the same time" scenario. With Yani's help, it took about 5 seconds for both of us to press 'enter' on all laptops. Each XO would discover each other, exchange profile information and keep exchanging presence/discovery information.

According to the protocol, presence (mac address) arrives about other XOs first, then the profile for the newly arrived mac address is queried and finally the profile is cached. We assume that initially each XO has no cached information about other XOs. As a result, every XO will query everyone else.

We measured the time it took for each XO to discover and exchange profile information with everyone else, bandwidth usage at all times (during profile exchange and after the network stabilized when all profiles were received everywhere)

This graph shows arrival of profile information at each XO from other XOs a function of time. Each bar is a 3-second bucket representing the average number of profile arrivals during this 3-second period. The standard deviation is shown with the blue lines.

This graph is the cumulative distribution function. It shows that, on average, each XO has received about 95% of the profiles of the rest of the nodes within just 20 seconds. This performance boost is due to the fact that each XO queried for its profile, responds by broadcasting the profile, instead of unicasting it to the requester. As a result, the other nodes receive the profile too and the next node is queried, yielding a linear cost, instead of a quadratic one.

Before the experiment was started, a node shared a chat session and all 64 nodes joined consistently. I sent a few chat messages from a couple of XOs and were received on all other XOs.

After about 6.4 hours of continuous operation on all 65 nodes, Cerebro shows stable memory usage (<10MB) and consistent CPU usage (83 minutes of CPU usage in 'top').

So far, Cerebro has been tested on up to 27 XOs. Here are some preliminary test results Experimental results.