OLPC has started a Pakistani pilot in Atlas School in Rawalpindi Pir Wadhai. Dr. Habib Khan announced the launching of the pilot project at the Atlas Public School, located in the slums between Rawalpindi and Islamabad.

Many thanks to our Afghan volunteers, Usman Mansour “Ansari” and Sohaib Obaidi “Ebtihaj”, who discovered the school and will be mentoring students and their teacher.

Atlas public school is located in the Rawalpindi district near Pir Wadhai (Pakistan). It's not far from Islamabad the Capital City of Pakistan. Atlas school located in very populated area and to reach there we passed through a busy road. Childrens living there belongs to poor families. Education has become an important factor for the development of their children. Total numbers of students are 78 from grade 1 to grade 6 and their timing is from 2.00 -5.00 PM.

The area is economically poor and lacks security measures and basic facilities. There are about 100 Afghan refugee children (Grades 1–6),many of them work during the first part of the day to support their families and attend school in the afternoon.

Handing out the Laptops

First day when we came. It was Wednesday.When we came to introduce the OLPC Project to their school, they weren’t expecting us.We introduced the principal & teachers to the project, and we had our first session with them. After 3 days we again went there and in the evening, we handed out the laptops to the Teacher and school children in a special meeting we held with them for that purpose.

Saturday evening, we had set the meeting at 3 PM. We started at 3.30 PM, when more childrens were around. The principal welcomed the OLPC in school and met with our Director Dr Habib Khan. Principal spoke of how honored the school was to be the first one to receive the laptops and to participate in the development of the project in Pakistan. After him, Our Director Dr Habib Khan spoke, explaining the purpose and details of the project. 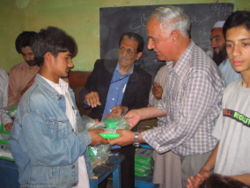 We handed out the laptops following the school lists. Each child came to the front to receive an XO laptop and to have a photo taken. Everybody was very excited.

In afternoon on Monday first week, all children were in their classrooms with their laptops charged. Most of them had already tried it at night, and it was a mix of discovering new things and sharing with others what they had already discovered. Teachers kept on teaching, letting children explore their new laptops and encouraging them to do the class work. There we faced language issue because children could only speak Pashto or Dari. Thanks to Dr Habib Khan & our Afghan volunteer ( Usman & Sohaib) for explaining every thing in Pashto.

The first day of our pilot project was full of excitement, Children didn’t know how to control and use the cursor (mouse) in XO when it just not moving in the direction they want. When we were asked by a student to help him, to solve this we tried about 2 or 3 minutes to move the cursor but couldn’t.One student from grade 4 told us to add some chalk (used to write on black board) on touchpad and when we did it works

Atlas Pilot is going on very well accelerating kid excitement day by day.Children have gotten used to working with OLPC.For the first two weeks kids concentrated on Tam Tam and Video Camera.Now they are using the write activity for learning and how to write a letter.Children are found of using the library to read story books in Farsi and browse through maps. They also discovered Multimedia (Watch & Listen) activity that we had downloaded from the wiki (we di not announce to children) to play Afghanistan national anthem and patriotic songs.All 5th graders have explored e-toys and are helping others kids to use e-toys. Next kids would learn to browse through the OLPC wiki for which we have acquired necessary wireless Internet.The purpose is to give children a good idea of Internet and how it works on XO.

New Idea from a child

Children didn’t know how to control and use the cursor (mouse) in XO when it just not moving in the direction they want. When we were asked by a student to help him regarding mouse issue, to solve this we tried abut 2 or 3 minutes to move the cursor towards they want to but couldn’t, Here they discovered a new technique. One student from grade 4 told us to add some chalk (used to write on black board) on touchpad and when we did this it works.

Following are the points raised by the teachers

We gave only 29 XOs to selected students from grade 3 to grade 5, they want that every child in school should have XO. There must be more activities for children for learning and entertainment. From next month school exams will start, for that they want to fix time for XO learning in school. There should be Pashto learning material available on XO( available now).

In school there is a family (Father, Wife and their 15 year old son) all serving as teacher, are very excited about XOs. In start father did complaint about his youngest son that he has gone crazy for XO. First day when we gave XO to him, he brought his XO to home and his son took from him. From that day he didn’t get chance to use. In last week he tried to get back his XO from him. In response his son refused to eat anything and threaten them. Now he spends 24 hour with his Lover(XO) and even sleep with it. 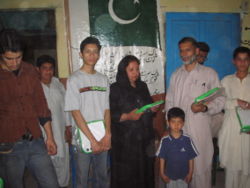 Child of the Week

On Wednesday when we went there for routine visit, one child came to us and told us that he pay 10 Rupees to another child for video recording. We surprised to hear and asked from that special child that how and why did you do this? His replied like a business man and said, I turn on the camera activity and put XO in front of a TV and record video. He charged 10 rupees for video recording. He also offer XO training in 150 Rupees. Wow.

Most students did not previously know the ABC’s, however after a week of working with the OLPC, they began recognizing the alphabets and have started forming small words and can type their names. Kids who were previously familiar with the English alphabets, can now type using the ABI word activity. They have also discovered how to change fonts.

Most of the kids however concentrated on the following two activities

The academic year is coming to an end. In two weeks children were very much busy in their final exam preparation. On Tuesday we went there as per our schedule and as we just entered in class room; one child came to us quickly and said that his XO screen is burned. We were astonished that how is it possible! When we were examining the faulty XO, all children were around the table to see what is going on. So we decided to conduct a session on XO Hardware and train them to repair their machines whenever needed.

For this experiment, we arranged a screw driver and asked the child with the screen problem to open his XO, so he can fix it himself. We guide them through how to do it carefully, and asked them to start the work. After that, we couldn’t able to see the patient, where it is. We could only see lot of doctors working on a single patient. Look at them.

They opened all the main parts of XO within 30 min. Then we started to explain different parts of XO to them, mainly its board, keyboard, speakers, processor and screen, we also explained how it works. After an hour session, all 5th graders knew about the XO hardware and how it functions.