From OLPC
(Redirected from Text-to-speech)
Jump to: navigation, search

Speak is a talking face for the XO laptop. Anything you type will be spoken aloud using the XO's speech synthesizer, espeak. You can adjust the accent, rate and pitch of the voice as well as the shape of the eyes and mouth. This is a great way to experiment with the speech synthesizer, learn to type or just have fun making a funny face for your XO. 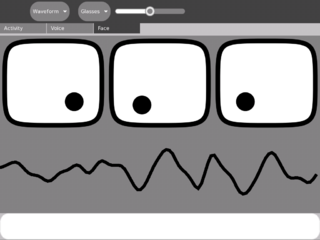 Download this .xo file from the Browse activity: Speak-9.xo Then follow the steps here: Activity_installation If you have an older version, you'll need to delete it before you can download the new version - or if you have a recent version of Sugar, you can just use the Control Panel's Software Update feature and it will upgrade Speak for you.

Type something and press Enter to hear it spoken aloud. Use the toolbars at the top to change the voice's accent, rate and pitch or the shape of the eyes and mouth. After you've adjusted the settings it looks nicer in full-screen mode (Press Alt-Enter to switch).

Use the up/down arrow keys to scroll back through a history of things you have typed, or click the arrow button at the bottom right.

Use the Journal to resume your Speak activity including all voice, face and history settings.

Speak is free software, licensed under the GPL. It is partially based on Arjun Sarwal's code from Measure and of course relies heavily on the wonderful speech synthesizer espeak. You can find the source code inside the .xo bundle or here: http://dev.laptop.org/git?p=activities/speak . If you have suggestions or contributions feel free to leave a comment on the discussion page Talk:Speak.

How to add a new language to Speak

Two students at Moira Secondary School in Belleville, Canada, worked on adding the Mohawk language to the Speak activity. Below are the details of how this worked; see also the Mohawk zip file for both the moh voice / dict / rules files and the instructions below.

The Speak activity on the XO laptop uses the espeak text to speech synthesis software written by Jonathan Duddington (http://espeak.sourceforge.net/) As a final project in June 2007, msaunders asked two high school students at Moira Secondary School, Belleville, Ontario, to research and attempt to implement the Mohawk language on the XO laptop.

Compiling a rules file for a new language

We started with espeak and espeakedit (available from the link above) The students, Eric Green and Aaron Basset developed a rules file for the Mohawk language. They were successful in compiling the rules file (moh_rules) into the dictionary file (moh_dict) that espeak uses. At this point we were using a Windows workstation, but it can be done directly on an XO.

We ran into difficulties attempting to port the Mohawk language on the XO Laptop. We received prompt assistance from both Jonathan Duddington (espeak creator) and Josh Minor (writer of the Speak sctivity). When I finally got around to documenting my students' experiences, it occurred to me it would be useful if the whole process could take place on an XO laptop, e.g. creating rules file, voice file and then compiling the dict file. After a little experimentation I discovered this was possible.

Additional language files just need to be in the right place. If you copy the moh_dict file to the following directory:

Then copy the moh voice file to the following directory:

You can query the list of available languages by running "espeak --voices" from the command line. When you use the Terminal on your XO, try running that command to see if it lists the new language.

If it does, and you have an older version of Speak then it should pick up the new language automatically without any modification to the actual Speak activity.

Newer versions of Speak use the gst-plugins-speak module instead of the espeak command line tool. That module copies a chunk of espeak's configuration to an obscure place the first time Speak is launched. That means that new languages won't show up in Speak automatically. You can make them show up by following the steps above and then removing and re-installing Speak. (Thanks to Christopher Naylor at MIT for figuring this out while adding the Haitian language.)

Then run the Speak Activity and the new language should appear as an option in the voices menu.

What is in a voice file?? The moh voice file contains the following:

The moh_dict file is a compiled file (compiled from moh_rules).

We used the Windows version of espeakedit to do this.

Compiling rules on the XO

If you want to create a new language using only the XO laptop, this is also possible. Use the simple text editor vi to create both the voice file and the rules file.

(you can find help with vi online. To edit an existing file, type vi [nameOfExisitingFile].)

You can now use the arrow keys or history popup to get back to old things you typed. All history, voice and face settings are saved in the Journal so you can resume right where you left off. Fixed some small drawing glitches. The eyes now follow the text cursor when you type. The eyes now look at you when speaking. Pressing Enter no longer clears the text entry area.

Thanks to Troy Ihmels for beta testing for me.

An extremely fun activity. The developer did a great job of using the speech capabilities of the app to make it easy for the user to start playing. Great job incorporating the accents for different languages. This is one of the best speech apps I've seen in a while. - Paul Russell

Best Activity I've found for the XO so far! My niece will love it!!! Great Job! - Dwight Harvey

There are intermittent performance problems, especially with long sentences. The toolbar sliders need icons or labels so you know what they do.