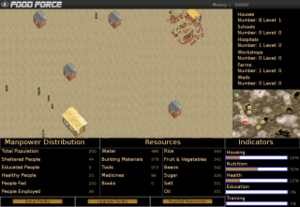 FoodForce 2 has been designed to educate and motivate people to solve world hunger. Since the laptop reaches out to the developing and third-world countries, it also educates children and teachers in a village on how to acheive self sustenance in a fun and non-intrusive way. It also provides awareness about the work WFP has been doing for the past many decades to abate the problem of world hunger.

FoodForce2 is both a classroom tool, and an outside classroom activity. It is a new kind of an educational solution, an “expanded school” which grows well beyond the walls of the classroom. The game play has been designed in a way to educate the child about certain key learning areas. The key learning areas on which the game focuses are:

The game aims at teaching children lessons on achieving sustainability and self-sustenance. It also provides lessons on Globalisation which are implemented through inter-community interaction. To impart these learning lessons, the game has been modelled around a few key elements or building blocks of the game.

The basic building blocks of the game are :

The aim of the player is to make a village self-sustenant in terms of nutrition, housing, health, education and training by consistent production and trading of resources with the help of necessary infrastructure. The game currently has a storyboard, which is developed from a viewpoint of an Indian villager, who is the Sarpanch (The administrator of the ruling body, Panchayat, of the village) of a village and his son helps him in the development of the village, who is the next candidate for the position currently held by his father.

There are three major aspects of the game:

All the above features of the game play have been illustrated using an interactive storyboard. The storyboard consists of 8 missions. The first 4 missions aim at teaching the player about how to get started. Once the player has got the knowledge of how to maintain the village, then he is made to face the real challenges. The next four missions expect the player to apply the knowledge he gained from the first four missions to real-life scenarios. There are scenarios like occurence of earthquake, through which disaster management skills are imparted to the player.

We also understand/realized this thing that all the topics of Social Concern cannot be integrated into a single story. Thus we are also working on making a storyboard creator tool for the educators/teachers through which the teachers can create their own storyboard and easily import them into the FoodForce2 game and ask their students to play that storyboard on the FoodForce2 platform. This would provide the teachers with tool/platform through which they can address to any of the social issues they want to focus on.

The game is currently based on a fully functional storyboard. To know more about the storyboard, visit : FoodForceII/Storyboard

The game has been developed in python and pygame. Pygame is a game development module in python, which is based on SDL (Simple Direct Media Layer Library), the portability of SDL library on almost all operating systems imparted the same to the FoodForce2 game.

The game is based on a MVC (Model – View – Controller) design model. This software design model consists of three components : Model, View and Controller. The Model serves as the backend of the game which is responsible for managing all the data values related to the game. The View module is responsible for the front end of the game, it handles the Graphics of the game, GUI and Interaction with the user. The Controller module serves as an interface between the View module and the Model, it interprets the commands given by the user through the View module and on the basis of which it makes changes in the model, and when there are some changes made in the model those are also reflected in the view module through the help of this module.

While developing the game, one of the biggest challenges was to make the game run on the OLPC laptops. To make the game work on the OLPC laptops it was required that the game is highly efficient and has a very small memory footprint, as the hardware of these laptops is not quite advanced and in sync with the computer hardware used on other laptops. In our endeavour to achieve this objective. We went beyond the conventional techniques of implementing various features of the game, and developed such algorithms that they would be requiring minimum amount of memory and time to run the game.

The Mesh Network (a wireless network in OLPC laptops) helped us in implementing the Collaboration feature in the game. Any two laptops can connect to each other and talk to each other through this mesh network. The game once shared over the mesh network can provide interaction between the two villages being virtually developed in the game.

The game has been successfully deployed and tested. For details, visit: FoodForceII/Project_Deployment

Code Base and Status Updates

Beta version of the game has been released. Please check the download section at : http://code.google.com/p/foodforce/downloads/list.