In 2006, the Brazilian Government, inspired by the OLPC view of learning, created an initiative to investigate the use of laptops in education. This initiative was named Um Computador por Aluno - UCA, which stands for one computer per child, as a way to define a national project, related to but independent of OLPC.

Late that year, the government decided to create several pilot schools as a strategy to learn as much as possible before starting a national scale project. At that time, other companies contacted the Ministry of Education offering their own laptops and the government decided to create 5 pilots, two of them using the OLPC XO. The Cognitive Studies Laboratory of the Federal University of Rio Grande do Sul State (LEC/UFRGS) was invited by the Brazilian federal government to integrate the UCA (One Computer per Student) Project, implemented with the goal of investigating the use of educational laptops as a learning tool in public schools.

Since then, the laboratory has been coordinating one of the pilot sites in Brazil, working in cooperation with Luciana de Abreu Public Elementary School, located in Porto Alegre. The purpose of this partnership is to investigate a new pedagogical models to support the future expansion of the initiative. At the present time, the government is about to buy 150,000 laptops to provide the desired 1:1 ratio (one laptop per student) in 300 schools geographically distributed all over the country. The XO laptop, designed and created especially for children’s activities, is the machine tested by LEC. 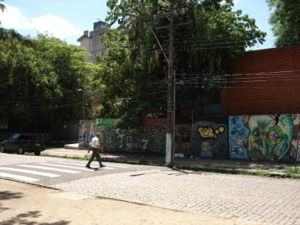 The Luciana de Abreu Elementary School is a public school that was selected by LEC to be one of the Pilot schools of the UCA Project. The school was chosen because at the time that the pilot started (early 2007), there was a restriction in the number of laptops that OLPC's manufacturing partners could produce for the Brazilian Government. LEC wanted to achieve saturation inside the school (rather than testing only one or two classes), and so it was necessary to select a pilot site that had less than 400 hundred students.

With a total of 350 students, the school is located in a urban area with high population density. The neighborhood is composed of many residential apartment buildings and small shops, being mainly a middle class neighborhood. However, the students of the school are mainly the children from the workers of the area and from a near shantytown - A vila plenatário. It functions as an elementary school (from 1th to 8th grade) during the day and at night it has an education program for adults and youth.

The introduction of the laptop into any school can be a struggle between respecting the established pedagogical approach of the school and inserting new ideas about education. On one hand, it is necessary to avoid the colonialist approach that the new ideas and traditions are better than those already in place. On the other hand, a core concept the OLPC project and the XO laptop is to introduce an entire vision about learning. The balance between these two perspectives can only the achieved through careful dialogue with all of the people involved in the initiative and a lot of respectful listening. In this section we will discuss some ideas and lessons learned at the pilot school. Part of them, were brought by LEC to the project, others emerged from the genuine interaction between the first ones and the reality of the school.

The evaluation of features which allow students to “learn through doing” comes together with a solid pedagogical analysis, composed by different units of investigation and sustained by thirty years of studies developed in the laboratory concerning the impact of the introducing information technology into educational settings. A fundamental issue that goes beyond the mere access to information technology is how to take advantage of the richness potential of digital media to help human and social development.

Society is changing from Industrial Era to Information Era. However, the knowledge and values transmitted by ongoing education are still replicating the old industrial paradigm by using massive methods of teaching. In order to overcome these barriers and turn students into the real authors of their knowledge, LEC has developed the Learning Projects Methodology. The Learning Project - LP was deeply inspired by Freire vision of education and by Piaget's epistemology. The Brazilian educational system, based on National Curricular Guidelines, enables flexibility in organization and management, which constitute a fertile ground to nurture and mature new approaches to education. Each school can create its own Political and Pedagogical Plan, integrating communities of teachers, coordinators, parents and students. This context makes Brazil fertile ground for innovative educational practices. The National Curricular Guidelines are aligned with the perspective of knowledge construction: they define as curricular contents concepts, attitudes and skills, emphasizing aspects such as expression, cooperation and communication.

The Learning Projects Methodology not only modifies the school routine, but also changes the paradigm of a secular educational institution. It considers the student the center of the learning process and marks the passage from an instructionist model of education to a pedagogy focused on the students’ real interests. When creating learning projects, in contrast to what happens in traditional classes, students choose the topics to be studied, based on their own needs and motivations, and the issues are explored in an interdisciplinary way. They share productions and become agents instead of receivers, “learning to learn” and think. Teachers, in turn, replace the role of transmitters of information by the role of students’ advisors and partners, encouraging interaction and the development of different concepts. Several researches conducted at LEC based on this methodology have demonstrated its success and benefits to children. The adoption of the XO, together with an appropriate pedagogical and methodological basis, is a powerful initiative to help changing traditional education, bringing along several possibilities to develop intelligence, competences and solidarity.