Roadshow in a Box

The Roadshow In A Box Project

How Does The Roadshow Work

The Roadshow began with 3 XOs (which will fit into a single XO box when the packing is removed). To this were added one G1G1 machine (mine) and one damaged machine that I repaired. Eventually, other damaged machines were acquired and repaired so that now there are 6 extra machines that can be lent out to people who want to try them to see if they will work for projects they are considering.

This Contributors Project could be replicated easily with as few as 5 machines, with 4 to be checked out and one to keep on hand for unexpected needs. More machines would make hands-on workshops and exhibits more feasible. Often there will be someone who will bring an XO that they got in the G1G1 program to the conference or exhibit and add it to the mix.

I have the machines marked with colored tape on the handle. Red means they don't get checked out. Green means they do. I have numbered them and marked them clearly with the number. Inside the battery compartment I have also written identifying information and my email address.

I have made up a simple check-out form to be used when people wish to borrow an XO for a short term loan.

Where The Roadshow Machines Have Been

SCaLE 9X at the Hilton LAX. Caryl and Ed, along with 11 other volunteers from the olpc-SoCal mailing list had an OLPC/Sugar Labs booth at the conference.This year the conference attendance was over 1800. The OLPC-socal mailing list now has 150 members! If you are in the Southern California area, we invite you to follow the link and sign up for the latest news on Open Source Software In Education in Southern California. 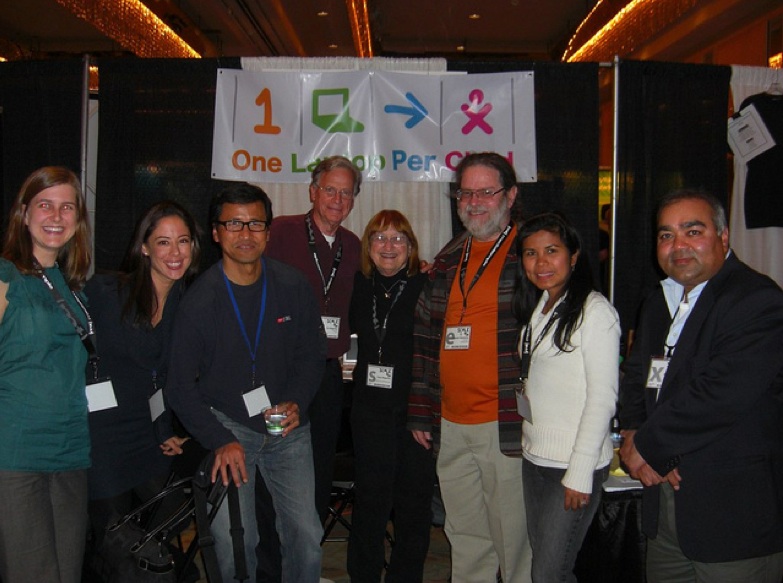 We had many visitors to our booth where we handed out over 60 copies of the Sugar Creation Kit DVD to interested developers and photo cards with useful links for OLPC and Sugar Labs information on the back to others. 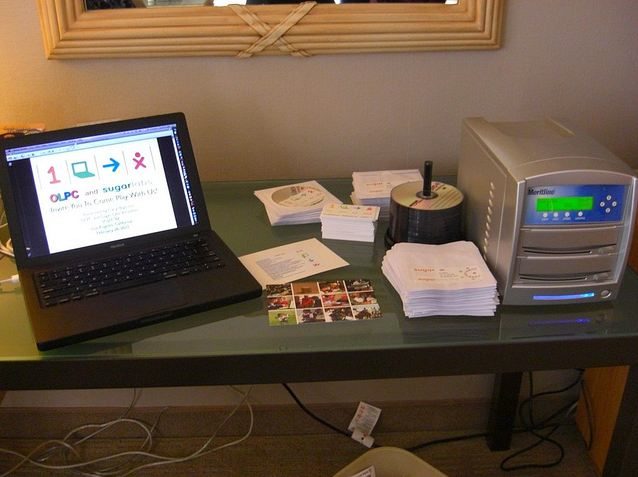 The SWAG factory. Presentation ready to go. Post Cards to hand out with links, business cards with links, Sugar Creation Kit DVDs (60+ given out), DVD burner loaned by Aldo Willis and Chris Louden of MW Services.

Many visitors enjoyed trying Sugar on the XOs we had in the booth. 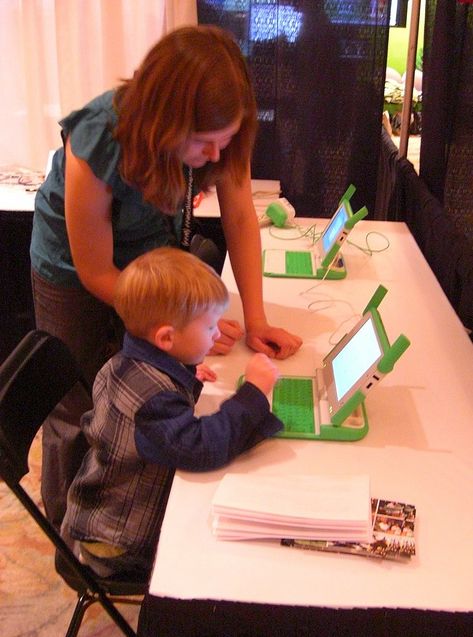 Anne Emerson, from UCSB, introduces a future SysAdmin to the XO-1.5 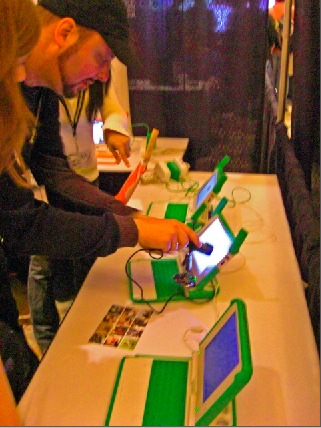 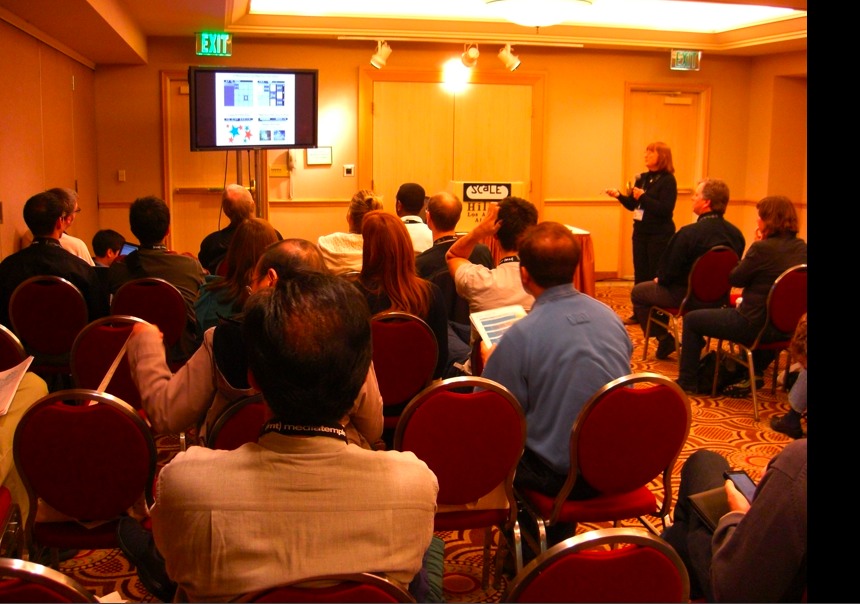 Caryl gave a presentation about volunteering with OLPC and Sugar Labs and the Contributors Program in the Open Source Software In Education (OSSIE) track on Saturday.

Lent eight XO-1s to Erik Americaner at Oak Park High School for a special student lesson about OLPC and the XO.

Met with members of Education Faculty at Montana State University to work on plans for Contributors Program project with schools at the Crow Nation in MT.

Checked out 2 XOs to Moorpark College to use in planning their Contributors Program Project. 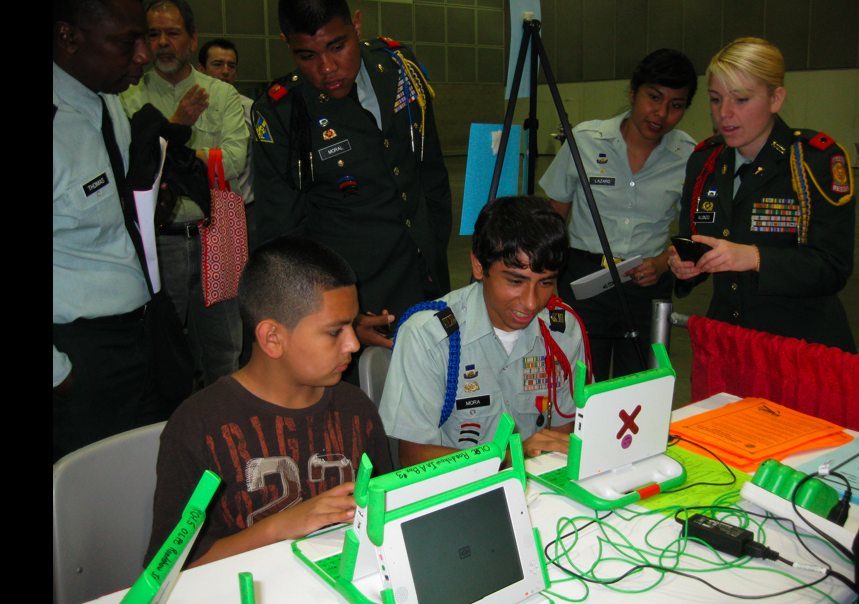 Set up in CUELA booth. Very popular booth! These students and their instructors are from Junior ROTC. 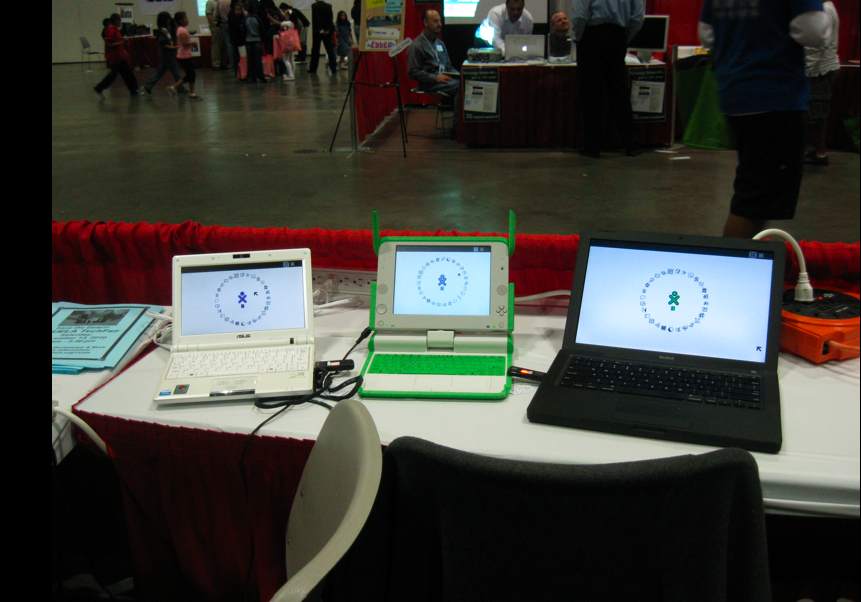 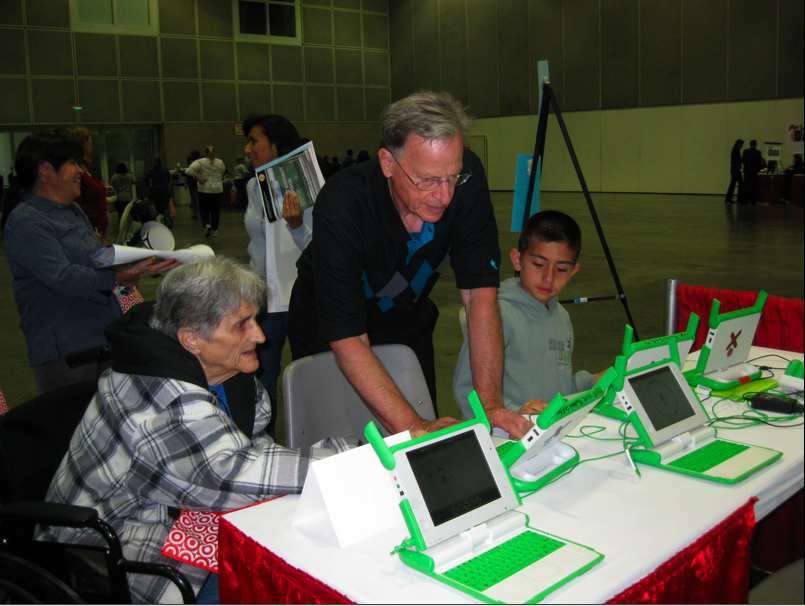 Volunteer Ed Bigenho helps a grandmother learn about the XO, OLPC and Sugar.

Checked out 2 XOs to La Sierra University to aid them in planning their Contributors Program Project.

CUE Conference in Palm Springs. CUE Unplugged presentation. CUELA XO library machines were also available and were checked out to teachers from CUELA. We used one of the Roadshow Machines for a quick orientation.

SCaLE 8X At the Westin LAX. Had presentation about Sugar and Sugar On A Stick (SoaS) in the Open Source Software In Education (OSSIE) track on Friday and a booth for OLPC and Sugar Labs in the Expo on Saturday and Sunday. We used the Roadshow machines in the booth and the CUELA XO lending library machines in a Hands-On "try it" lab on Sunday afternoon. About 70 people signed up for a new / OLPC-socal mailing list that will include news, ideas, and discussions about OLPC, the XO, Sugar Labs, and OSSIE. If you are in the Southern California area and would like to join the list, click on the link above. 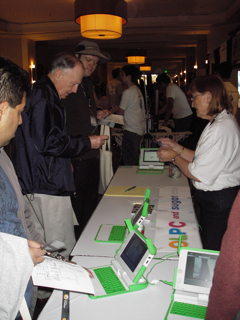 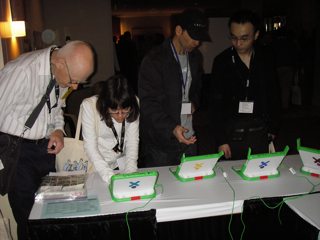 Moorpark College "Year of Service" speaker series. Presentation and hands-on opportunity. Two machines were checked out to a faculty member who is interested in starting a University Chapter at their school.

CUELA/LAUSD Tech Fair Unfortunately, we were scheduled in the last time slot of the day, so we did not have a good turn out. However, the people who did come really liked the XOs and were allowed to take home 2 machines each from the CUELA XO lending library to try with their students. Later, 2 other folks expressed an interest and they too were able to check out machines from the CUELA XO library. So far they have been showing them to other teachers, parents and students with great success.

Took several machines to people in Southern California who are interested in doing either Contributors Program projects or small deployments, or both. Left 2 each with them for a one month loan. One of the borrowers was a student group from Los Angelus Trade Tech College. They have since formed a new "OLPC/XO University Chapter" and plan to apply for an XO lending library for their students, faculty, and families.

The Billings MT LUG group requested a loan of the machines and Scott Dowdle arranged for them to get them for the next month.

Bozeman Linux Users Group Did a presentation about OLPC, XOs, Sugar, and volunteering at the June meeting at Montana State University. Scott Dowdle, the club president had SoaS (Sugar on a Stick) running on his lab machines and we used the XOs from the Roadshow. Six machines were checked out to club members for a month. Update: Bozeman LUG now has an XO lending library thanks to a Contributors Program project started by Scott.

CUE Conference in Palm Springs, CA. I did a presentation about OLPC at the conference and had the Roadshow machines available in the internet cafe area several hours a day for attendees to try. There was a lot of interest in purchasing in small quantities, but that was not possible at that time. There was also a lot of interest in starting a new SIG for Open Source educational software (including the XO and Sugar) which may be possible in the coming year.

Another individual, who had come to SCaLE from Wisconsin has started his own Contributors Program project working with Native Americans in WI.