This procedure is NOT recommended --- it is difficult to perform correctly. An easier way to repair a laptop with this problem is described in Replacing the SPI Flash.

If the SPI boot FLASH (U37) somehow gets bad data in it, so the firmware won't run, you can reload it with a special serial cable. 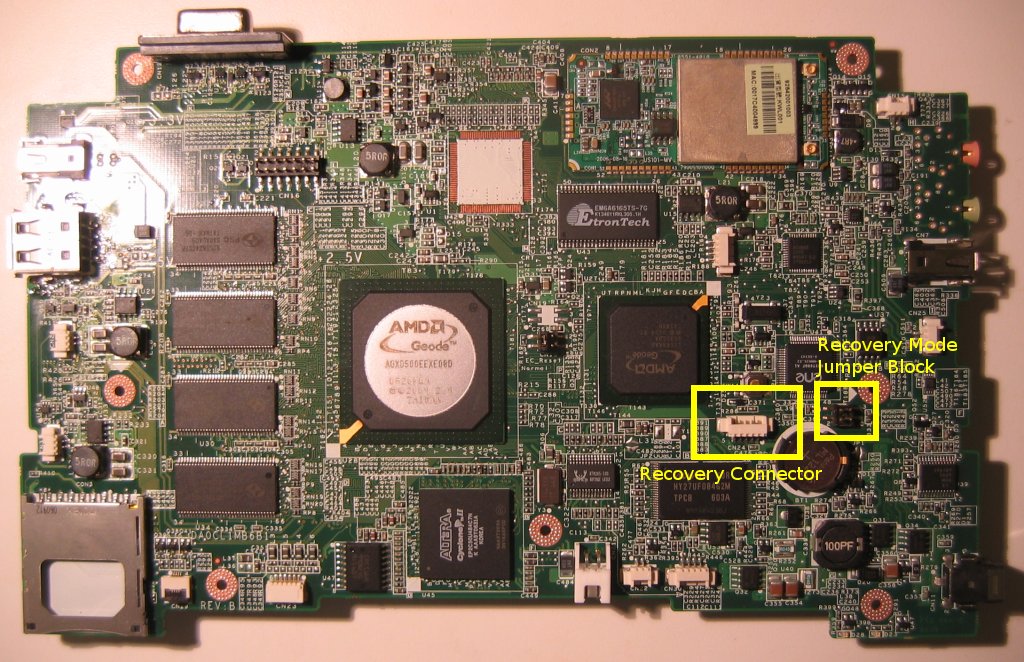 In addition to connecting the special cable to the Recovery Connector, during recovery you also must install jumpers in both positions of the Recovery Mode Jumper Block (CN31). It doesn't matter whether you install the jumpers horizontally or vertically; either orientation will work. If you don't have any jumpers the right size, you can wedge a metal object into the block, connecting all the pins together. A screw about 0.1" in diameter works well. Or wrap a piece of wire around the 4 posts.

Some related images showing the proper attachment of a CMOS oscillator and 5-pin EC serial header to the XO's motherboard:

If the oscillator is properly attached, an oscilloscope will show a nice ~65MHz sine/triangle/square wave on pin 5 of the EC serial header whenever the XO is connected to power. I found that it was fine to leave the control pin on the oscillator floating, although shorting it to the voltage input pin should also work.

The following dictionary is probably older than the one in spiflashrecovery.tar.gz download below and you probably have no use for it: updated, but old flashing forth dictionary for recent machines.

For the Atest board, there is no jumper block. You have to short across a couple of pads. They are just to the left of the ene chip, near the middle of the left row of pins on that part; see media:AtestRecoveryJumper.jpg. It's only necessary to have the short in place right after power up, so it's sufficient to hold something (e.g. a screwdriver tip) across them while you turn on the power.

The recovery connector is CN20 on the A-test board. It can be found near the EC. It is a five-pin connector. (Do not confuse with J1 which is a four-pin connector to the north).

Best option is to use the same five-pin SPI FLASH recovery cable as is used with the B-test boards, B1, B2 and B4 systems.

Alternatively, you can use the normal four-pin OLPC serial adapter cable as a recovery cable (that's not true for the B-test boards; they require an external oscillator that's not present on the normal serial adapter). The cable plug has four pins, and the recovery connector has five. You have to insert the plug into the right-hand side of the connector (with the board in the orientation shown above), so that pin 5, the one on the left, is not connected.

Connecting the Linux Host to the OLPC Board

Connect a "null modem" serial cable from your Linux host machine to the DE-9 connector on the special recovery cable. Typically, the null modem cable will have DE-9 female connectors on both ends. If possible, connect it to the host COM port that is associated with /dev/ttyS0 - typically COM1. If your host system doesn't have a built in COM port, you'll need to use a USB-to-serial adapter and figure out the associated device name.

http://dev.laptop.org/~wmb/spirecovery.tgz contains a Linux application to perform the recovery procedure. The archive contains two files: forth and spiflash.dic . The two files work together. forth is a Linux executable file that provides I/O interfaces that let the Forth programming language work under Linux. spiflash.dic is a Forth language workspace (AKA "dictionary") that includes procedures for performing the serial line recovery protocol.

Get that archive and unpack it into a working directory that contains the boot FLASH image file that you want to install in the OLPC board (that file is typically named linuxbios.rom).

Make sure that the "forth" file has execute permissions.

Start the program with

It will display a page of instructions describing the various commands, then issue an "ok " prompt.

Look at the software version number on the first line of the instructions that are displayed. If it says version 1.0, you need to download a new copy of the software from the web site. Version 1.0 works, but is more complicated to use. The instructions below are for version 2.0 and later. The most recent version is 2.2.

Here is an example of a typical command sequence for reflashing the entire SPI FLASH, including the EC code and the BIOS.

First make sure that all the connectors are hooked up and the jumpers installed.

The default serial port is /dev/ttyS0. Do the next line, substituting your port name, only if you are using a different port:

You will be prompted to remove all power from the machine and plug it back in to power. Press enter, then, if all goes well:

<There will be a several-minute delay here. Be patient! It is working.>

The default image filename is olpc.rom . That name will be used if you omit the filename on the "flash" command line.

If you don't see the "SPI FLASH is ..." message, i.e. if it fails or hangs, it means that the host system can't talk to the OLPC board. Check the connectors, jumpers, etc, and make sure that you are on the right serial port on the host.

If you have re-issue the "flash" command, like for example you control-C out of the program and restart it, you'll need to power-cycle the OLPC board. The OLPC board will only accept incoming connect attempts after a power-up. If you have already connected to it once, you can't reconnect without power-cycling.

The flashing process should take between 1 and 5 minutes, depending on how much unused (set to 0xff) space there is in the image.

Some notes on using the FTDI-based USB to Serial adapters "Universal Serial Converter" follow. I found this board very particular about power-on sequence, so here is what worked for me. The target system had jumpers installed, all power removed, and connectors from CN24 to the USB adapter. Then I plugged power into the target, waited a few seconds, and connected the USB cable to the host. Following this I did not plug or unplug any further cables. I typed 'reflash q2e45.rom' and pressed enter.

Note that, unlike some earlier versions of our FLASHing software, this program always updates the entire FLASH in one step. There is no separate procedure for updating the EC code versus the BIOS code. The reason is because there is no advantage to preserving the EC code on the new boards that do not have have a separate PLCC socket. Lacking a PLCC socket, if either part of the FLASH is bad, the only alternative is to update the FLASH via the serial recovery procedure. The simplified procedure guarantees that consistent EC and BIOS code will be loaded simultaneously.

Verifying is quite a bit slower than programming, due to the characteristics of the serial protocol coupled with Linux scheduling issues. The net result is that programming goes at about 5K bytes per second (for most parts), while reading (necessary for verification) goes at 1K bytes per second.

So programming all the bytes of a 1 MiB SPI FLASH takes about 3.5 minutes, while reading or verifying them takes 17 minutes. Ouch!

Since verifying is so slow, you might consider not doing it. Most of the time the writing process will work just fine, and you can boot the system and let the running firmware do the verification at memory access speed.

To read the contents of the SPI FLASH and save it to a file:

This will read the entire 1 MiB FLASH, which will take about 17 minutes.

<Mitch_Bradley> From an xo, the recipe would be:

Powering up the btest Board

Having done all that, LinuxBIOS should start.

This section is for the many curious people on the OLPC project. It is not essential to completion of the recovery task.

For most SPI FLASH chip types, including Spansion, Winbond and ST, writing is reasonably efficient. After a few bytes of setup, a stream of 256 consecutive data bytes are transmitted. There are two serial bytes per FLASH data byte; a fixed register number followed by a data byte. For the SST part, the write procedure is more complex. The astute reader might wonder why the EC designers did not make the protocol require only one serial byte per FLASH byte. Your erstwhile author wonders that also.

At 115200 baud, roughly 10 KiB/s serial can be transferred. That nets about 5 KiB/s FLASH. The time for the FLASH part to perform a write is small compared to the time for transmission via the serial line.

Reading is not so efficient because of the characteristics of the EC. An SPI read cycle requires a "dummy write" cycle before reading a register for the data. The dummy write generates 8 clock cycles on the SPI bus, during which the FLASH chip returns the data. The net result is that reading a byte requires 4 serial bytes; two sends for the dummy write, and a send and receive for the data read. So reading inherently takes twice as long as writing. It works out to 2.5 KiB/s and indeed that throughput can be achieved with a host program running "standalone" without an operating system.

Performance was worse on the installation I tested and is anticipated to be no better on any Linux system. Linux throttles the serial communication to exactly one "write, write, write, read" sequence per millisecond. That works out to reading 1K bytes per second. I've tried many variations of raw serial I/O with different settings for VMIN and VTIME, both blocking and non-blocking, to no avail. Reading more than one byte with a single read() call is not practical, because the "write, write, write" sequence for the next byte can't start until the "read" for the present byte has finished.

Most PC serial ports can run faster than 115200 baud with chipset-dependent driver code. That would have greatly complicated these procedures.