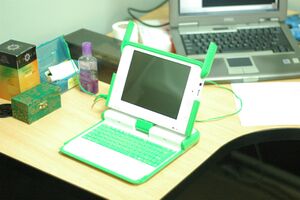 JANUARY 16, 2008 From James in canada - I woul dlike some feedback on my thoughts re: OLPC and the NBN Project:

Hi Chief Mike, good news ;>) - my XO just arrived in Saskatoon. I will have a few days to get familiar with it and them I will pack it up and bring it with me. Will be in Manila on April 6 and am now planning to travel to Kalibo on Thursday April 10. I will call you from Makati unless you post here before April 4 with any updates. Cheers, James S. 28/03/2008 @ 18:54CST.

Sorry you caught me at a bad time on the phone last week as I have a bad ear infection and was taking a nap when you phoned from Boracay... and also I had an appointment with the Kalibo-SB town's counsel(Demo-ing another XO-1 that I received on friday in the regular mail w/Php35.00 total handling fee) at the scheduled meet-up time with you. But anyway, many thanx for coming to Aklan, hope you had a good vacation here no sunburn:) And showed off your New-Mochine 2 any and all.
--Chief Mike 10:56, 16 April 2008 (EDT)