In this section, I show

The following system was built from parts purchased at [SWS Electronics and Computers ] a local computer parts store in Tucson, Arizona (USA).

Assembling the Parts Together 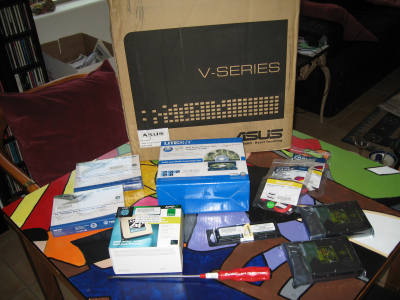 Here are the parts purchased.

I had purchased two extra red SATA cables, but then learned that one was already included with the Barebones PC. Also, had to go back to the store for an extra EIDE-to-SATA (white to black) power cable adapter. The phillips screwdriver #2 (shown with red handle) is all that you need for tools. 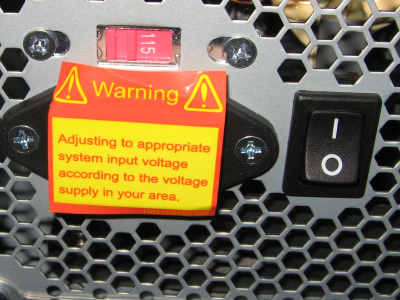 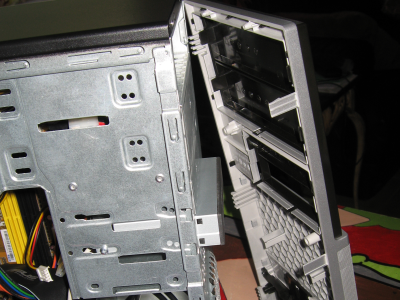 Remove left side and front panels. 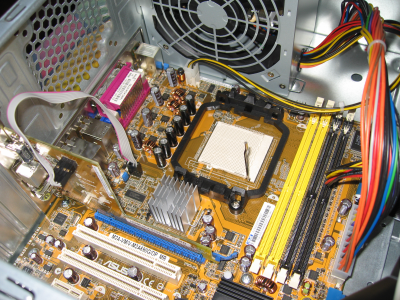 Since this motherboard has an AM2 socket, we could have gone with either an AMD Sempron or Athlon64 X2. I chose the Athlon64 X2 which was more expensive, but runs faster.

Installation was tricky, and I watched some YouTube videos to see how others had done this. Remember to always hold the processor by the edges, and never let the gold pins touch your skin or anything else because you will leave small amounts of oil or sweat that might ruin it.

To install, raise the shiny lever (shown in the up position above), align the corner with the triangle on the chip with the triangle on the motherboard (it is the corner nearest the power supply in the picture above). Line up all the pins, and push down into place. If it didn't work, lift the CPU up, and try again. Once in place, move the shiny lever back down to snap everything in place. If you fail to do this step correctly, you might end up buying another CPU. 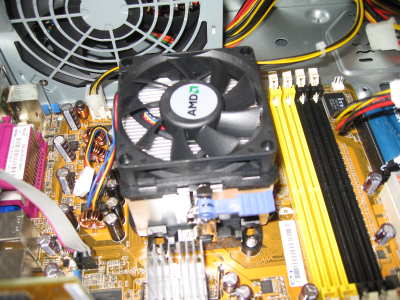 The fan was also a bit tricky. There are two silver brackets. Align the fan so that the blue-purple level is away from the power supply. Put the fan on the processor, and snap in the bracket that is nearest the power supply. Turn the lever all the way to the left, push down on the fan, and attach the other bracket. This second bracket is then made tighter by turning the blue-purple lever clockwise until it is snug against the processor.

Connect the fan to the power cable connection on the edge of the motherboard. The plug is slotted, so you can only put it in one direction. 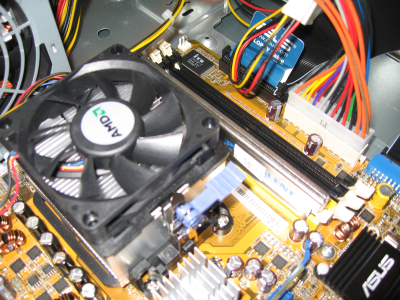 There are four slots for memory, two yellow and two black. Starting near the CPU, they are:

To install, push the white tabs down on both sides of the yellow slot. Insert the DIMM, there is a notch with 112 connections on one side, and 128 connections on the other side, so there is no way to put it in backwards. As before, don't let the connections touch your skin or anything else. 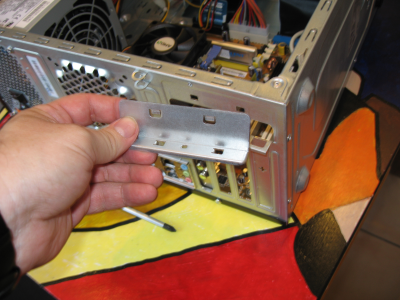 Before you can install the two PCI-based NIC cards, you have to remove the back plates and this holding bracket. Using your screwdriver, twist off the two metal plates for the two PCI slots. You have to slide this bracket out (shown here in my hand) and it was not obvious which way to push, pull or squeeze to get it. It is "left and up" as shown in this picture. 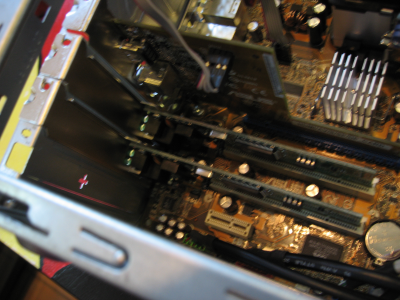 Don't let the connections touch your skin or anything else. Firmly push each one into place, then put the bracket back using "down and right" to hold the cards in place. 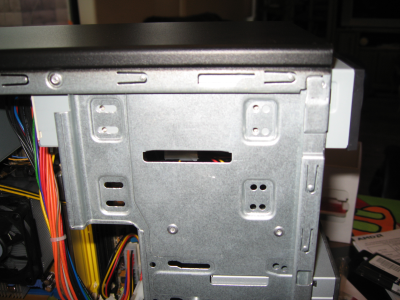 You will need to remove the right side panel as well for this. On the back of the DVD there is a small plastic jumper that slides over two pins. Make sure it is in the "Master" position, and if not pull it off, and put it back on the right way. Most CD and DVD drives assume they will be "Slave" so are often configured for that already. Slide the DVD drive through the top slot of the front panel. Make sure the front face is lined up with the card reader. Wiggle until the holes are visible and apply the screws from both left and right sides to minimize vibration.

This was a good time to count my power cables. There were plenty of EIDE (white) plugs available, but only one black SATA power plug (shown in my hand here). I had to go back to the store to get an extra EIDE-to-SATA-power adapter. 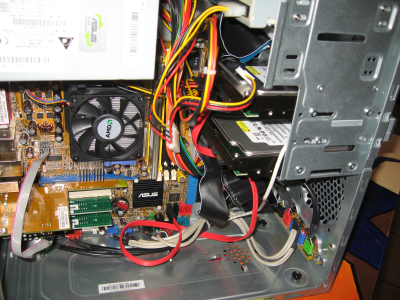 The two SATA drives are "internal" so are pushed in from the inside into place. This was quite difficult because (a) the CPU heatsink/fan was in the way, (b) the Multi-card reader was already in place, and (c) the power cables were in the way. It might have been better to do the steps in the following order:

For EIDE, there were two flat-ribbon cables. One for the floppy, and one for the Primary Master/Slave. Since we have two drives and plan to attach them to SATA instead, we can put the DVD on as Primary/Master. (I am glad I moved the jumper ahead of time, it would have been difficult to reach once in place!)

For SATA, the Barebones PC already came with one red signal cable, so I had to purchase a second one. There are two kinds of cables. One type of cable has straight connection on one end, and 90-degree bend at the other. The other type of cable has straight connections on both sides. If you have a 90-degree bend at one end, that end goes into the drive. The straight end connects to the motherboard. 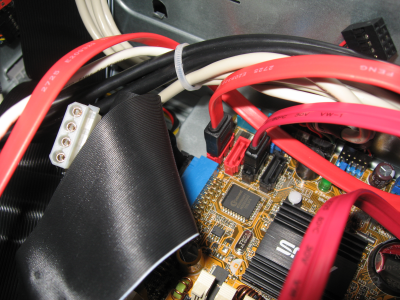 I should have read the manual on this one. Instead, I could not see which of the four connectors were SATA1 and SATA2, so I tried several combinations until I finally gave up and downloaded the manual. As shown here, they are (from left to right)

If we were using the hardware BIOS-assisted RAID (known also as "fakeraid") this might have been important, but we aren't, and Linux managed to figure out where everything is. Having one on red and one on black probably spreads the I/O across both channels evenly.

The left side panel has some extra "air vent" plastic, and with it in its fully extended position would not fit back. Turn the plastic 90 degrees and push down to have a low profile so that it will clear the CPU heatsink fan.

Plug in keyboard, mouse, monitor, ethernet cable, and electricity. The power button is located on the lower right corner of the front panel. It will light blue when the system is running.

Some changes to the BIOS were necessary. 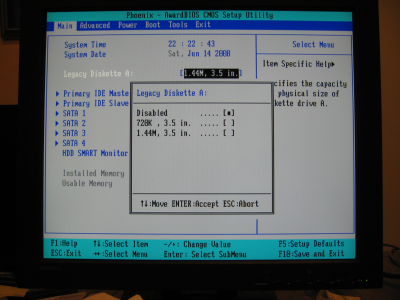 When you boot up the system, it will tell you what BIOS level it is running. Press "Delete" (DEL) button to launch the BIOS configurator.