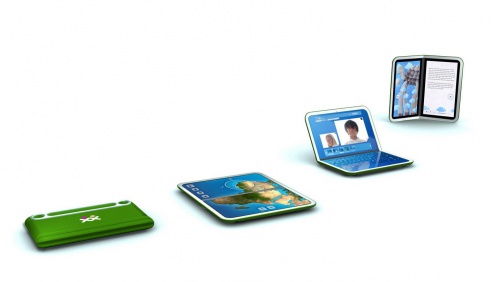 The XO-2 two sheet design concept was canceled in in 2009. <ref>2009-11-04 OLPC XO-2 cancelled: tablet will be developed next: The One Laptop Per Child project will not be producing a dual-screen follow-up after all, but has plans for a tablet- or slate-style XO-3, according to founder Nicholas Negroponte by Jack Schofield</ref> It was cancelled in favor of the one sheet XO-3, which was also cancelled in late 2012. See also the XO-4 laptop, which is a successor to the XO-1.75.

On May 21, 2008, at an OLPC Country Meeting, design studies of a next-generation OLPC laptop/tablet (the XOXO, XO-2, or just 2) were shown to attendees and to the world press. The second generation device from OLPC doesn't fits neatly into the "laptop" category. The form factor is instead that of a book or folded (clam shell) tablet (a handbook). The entire interior surface is a multi-touch sensitive display. Each individual display would have a 16:9 aspect ratio.

Development of this design is currently halted. OLPC is instead working on an alternate design (XO-3). 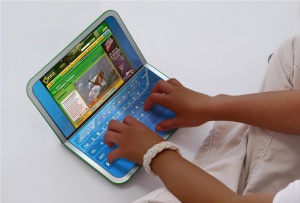 At least three modes of operation are expected:

The bezel between the displays will be minimized around the hinge, and the handbook will open flat (and lie flat), providing a roughly square display. This is suitable for writing, exploring graphical material or "board" games. Both screens will be driven with the same, or identical, graphics and video processors.

The case will be sealed against dust intrusion and anything up to, but not including, immersion in water. The use of a case material that flexes to cover the hinge section between the pieces is planned, allowing a single piece outer shell, and greatly simplifying meeting these requirements. 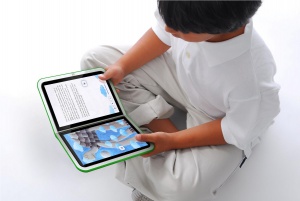 While the displays are identical, the industrial design will be biased, with one side being heavier to provide stability when used in "laptop mode". In this mode, manual input devices are synthesized on the lower display, resting flat on a surface. This display may also be equipped with tactile feedback devices to enhance the "typing" experience. One advantage of such a programmable input surface is that keyboards may be changed from one set of glyphs to another instantly. Likewise, alternative "keyboards" such as a piano keyboard may be provided.

As in the XO, the non-volatile storage will be provided by NAND Flash.

It is likely that the same mesh network coprocessor architecture used on the XO will be be provided, along with a similar 802.11b/g radio. The trademark antenna "ears" of the XO-1, however, will be placed internal to the case.

The networking module will likely use an industry standard miniPCIe card internally, allowing field replacement of faulty modules and factory configuration of different networking options (such as WiMAX, 802.11b/g, 802.11n, etc...) if desired.

A full stereo microphone (internal and external input) will be provided, in addition to stereo speakers and headphone jack. A camera capable of stills and video will be mounted on the bezel of the left hand (upper) side of the handbook. 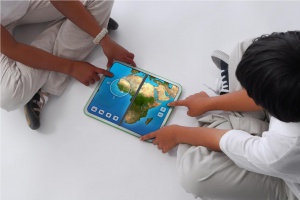 The intent is to improve the analog input, providing a full voltage range and higher frequency response than the XO. The Measure activity has proven to be popular.

An (internal) Flash memory card slot (SD) will be provided, allowing for expansion of the available storage.

The intent is to provide enough battery for a full eight hours of moderate use. This should be achievable using a 16 - 20 WH LiFePO battery