This is an on-going translation 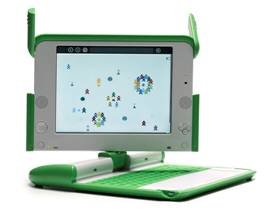 The XO by One Laptop per Child (OLPC) is not just visually green, it’s the most eco-green laptop ever made. Many would have you believe that buying “green” will cost more. This is true, for example, for hybrid cars. OLPC was unwilling to increase the price to go green, instead we concentrated on low-cost, low-power, long-life, and field repair and in so doing have created a stunningly green laptop.

OLPC is in process of filing for the first “gold” award that has ever been given to a laptop by EPEAT an organization that assesses the environmental impact of laptops according to the IEEE 1680-2006 specification. XO is also non-toxic and fully recyclable. We are planning a full take-back program. In other words: these machines are not destined for landfills at the end of their approximate 5 year lifetime. 2.5X the lifetime of a typical laptop.

230 million personal computers are dumped in landfills every year. 500 shipping containers full of e-waste arrive in Nigeria everyday. The XO could lower the landfill impact in 4 key ways:

Our goal: not a single XO laptop to end up in a landfill. 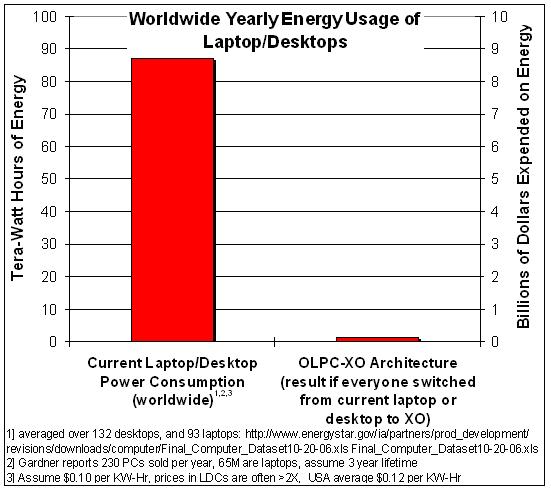 Gardner reports that 230 million personal computers are sold per year, approximately 165 million of these are desktops and 65 million of them are laptops. Assuming 2000 hour use per computer per year at the low end of power consumption (idle-mode), and an average 3 year lifetime, 87 billion kilo-watt hours are used to power the world’s personal computers per year. If every personal computer was replaced by an OLPC XO laptop, just 1.5 billion kilo-watt hours would be needed: thus 85 Billion kilo-watt hours could be saved. Alternatively, the industry could just adapt a lower power consumption architecture like we have created. It allow human power recharge, and accepts solar power input, wind power, etc. At $0.10 per kilowatt-hour the savings of a massive switch to an XO or an XO like architecture amounts to a $8.5 billion dollar energy savings. And at 1700 kilo-watt hours per barrel of oil: 50M barrels, and 65 million metric tons of CO2 emissions or another approximately $500M yearly in carbon-offset dollars.

EPEAT has created a procurement tool to help evaluate, compare and select desktop computers, notebooks and monitors based on their environmental attributes. EPEAT provides a clear and consistent set of performance criteria for the design of products, and provides an opportunity for manufacturers to secure market recognition for efforts to reduce the environmental impact of their products. OLPC is in process of applying for a rating, which we believe will be excellent. XO appears destined to be the first laptop to receive their Gold Rating, it has even been suggested that the XO may warrant establishing a new, even higher rating. XO achieves the following which should give it the first gold award: 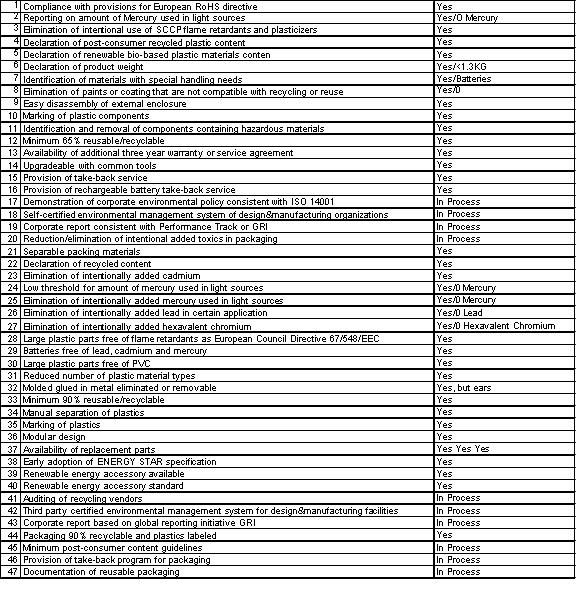 Notably - above and beyond the EPEAT requirements, XO has

Thus, above and beyond EPEAT, in our first year of deployment of 3–5M units we will save, when compared to any other EPEAT ranked laptop shipped in the same year, the following:

As we scale in our second year of production these savings should increase even more: to preventing as much 500-million pounds of e-waste, and saving 2.5 Tera-watts of power. OLPC is working with other organizations to assure its environmental impact is very low and more information will be available here in the coming weeks.