Bababé is a small town in the Brakna Region of Mauritania. It is located between Bogue and Kaedi, two regional capitals in southern Mauritania, and is two kilometers away from the Senegal River. The town is also its own department, which includes a number of smaller villages in the immediate vicinity.

According to our ground contact Zach, Bababé is a wonderful town that is on the border between being a small West African village and a city. Although it has over 8000 people, it still has the feel of a small village. It is a tightly knit community in which everyone knows each other. The village elders still gather in the marketplace every evening, and when asked to describe their town, people often say it is like one family.

Bababé is very focused on agriculture, specifically irrigation farming and fishing since it is close to the Senegal River. At the same time, the town is rapidly developing; two massive diesel generators were installed 6 months ago and now provide power from noon to midnight. The town has a sense of forward progress. It is rapidly becoming more independent from the regional capitals on both sides, and many local, national, and international groups are working together to improve the condition of life here. With the arrival of electricity, satellite internet is becoming available as well.

There are three primary schools, a large middle school, and a high school. 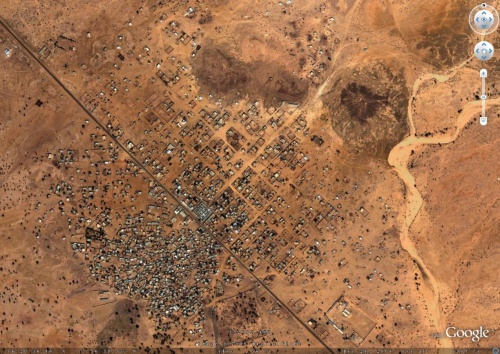 The Islamic Republic of Mauritania is located in northwest Africa. It shares a border with Senegal, Algeria, Mali, and Western Sahara.


Population
The population is about 3.1 million. Most Mauritanians are Sunni Muslims.

The population of Mauritania is young, with the median age at 19 years old. The average life expectancy is 54 years.<ref>https://www.cia.gov/library/publications/the-world-factbook/geos/mr.html</ref>

The population is concentrated in a large port in the north that supports fishing and mining activities; the capital city; and in the Senegal River Valley region in the south.

Half of the population still depends on agriculture and livestock for a livelihood, even though many of the nomads and subsistence farmers were forced into the cities in the 1970s and 1980s by recurrent droughts.

Ethnic groups
The country has two main ethnic groups--black Africans and Arab-Berbers. This is the result of French colonization during the 19th-20th centuries, during which several kingdoms were merged to form Mauritania. The black Afro-Mauritanians who consider themselves African include the Fulani, Soninke, and Bambara. The Moors (who consider themselves Arab) include the Arab-Berbers (Beydan) and the black Moors (Haratin). The Haratins are black Africans who were enslaved by white Moors. There are still ethnic tensions between the Africans and the Arabs.


Other ethnic groups include the Halpulaar, Soninké, and Wolof.


Education
Education in Mauritania is split into two languages. French is used to teach math, science, French language, physics, and chemistry. Arabic is used to teach history, religious studies, philosophy, civics, geography. However, Hassaniya, a dialect of Arabic, is the spoken language.


Geography
Although Mauritania is the 29th largest country in the world, it has only 3000 km of paved road (about 27% of its area). 75% of Mauritania is desert or semidesert.


Climate
Mauritania is hot and dry year round (Monthly Averages for Kaedi, MRT), with regular sandstorms.