Space Tag is a fast paced, action packed, playground thriller that's out of this world. Immerse yourself and a few of your buddies (after all, sharing is important) in an overhead pseudo 3D world filled with fuzzy physics. Enjoy virtual dimensional awareness, hiding places, playgrounds, skinned knees, and noogies.

A long time ago, in a land far, far away, you got tagged. It was there those two words soaked into your mind, there to stay for the next 50 years or so. You're it. Relive your shameful childhood... in space, where no one can hear you cry.

Space Tag is being developed at Centenary College of Louisiana by Mark Goadrich and Nolan Baker.

The person who launches the game is IT (circled by a blue moon), who must share the game with other players. You will always be the yellow spaceship, and the other players will be red spaceships. To tag another player, you must touch them, i.e be near them in x, y, and z coordinates.

Every player has a spaceship, controlled through the keyboard: 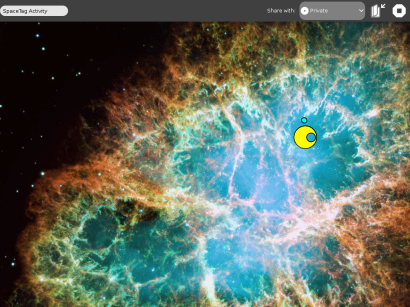 Space Tag is built with Pygame using the OLPCgames wrapper.

Did you enjoy it? How are the controls? Was the commentary in the code clear enough? Please post any feedback here. We'd love to know what you think. Thanks.

Was only able to run some basic tests on XO hardware (joyride-2273), looks good and I could fly about, but could not stop the Activity. Had to force quit sugar in the end. --garycmartin 2008 Aug 1201:09 BST