From OLPC
(Redirected from Talkntype)
Jump to: navigation, search

This will eventually be an Activity based on the 1970s toy, Speak&Spell. 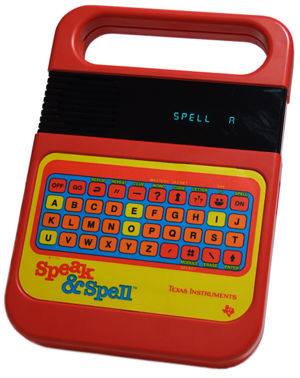 Extremely blurry demo of how the app works currently... The sound is more important than the video... <youtube>ZvYlJVfyJsg</youtube>

The code [here] isn't ready for general use yet - it doesn't use the Sugar user interface, and only uses the terminal within sugar.

The code (such as it is so far) can be found at [http://dev.laptop.org/git?p=activities/talkntype]

The code above only uses the simplest (level 1) dictionary, and doesn't have any of the vocabulary refinements of the original toy (ie doesn't say "spell FOR, as in for me", or "spell FOUR, as in number four".

The original dictionaries are presented below, as comma separated variable sets:

I've had a lot of fun with this activity by entering in personal spelling lists for my users. I created a custom list with abiword.