I am a person who is interested in many things in life. As such I have sprouted into many different interests, hobbies, and directions throughout it. 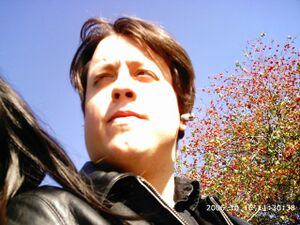 I live in Cambridge, Massachusetts, USA, not far from Central Station. I have a small studio apartment here for now. I moved here from Texas in July, but I have lived many places in the world so far, and want to continue to experience living in as many places as possible as my life continues.

If you would like my contact information, please contact me on my User Talk page, and we can exchange further emails. I wish I could put it here, but I can't trust that my information won't get crawled and used for heinous purposes. I do have my email address on file, so you can email me from within the wiki.

I am primarily self-taught in everything that I currently do. I was exposed to computing at an early age, and as such it became the fabric of my entire life. I am however, saving up money so that I can re-enter school, finish my undergrads in Computer Science, and continue on towards a Graduate program, so that I may acquire a Masters and eventually a Doctorate in Computer Science.

I have at least some experience in all of the following:

I was exposed to computers at a very early age. When I was born, my father already had a Radio Shack TRS-80 Model I and an Atari 800 (both with multiple floppy disk drives.) in the house. By the time I was three years old, I had started to learn programming in BASIC on both the TRS-80 and Atari 800, and started writing simple games. I also was introduced to LOGO during this time, (and I do have to say that the Atari 800 implementation of LOGO was simply fantastic, making full use of the Atari's Player/Missile Graphic objects..), and by the time I was 7, had started programming Assembler, asking my father to buy a copy of MAC/65. To this day, I still find the MOS 6502 CPU to be a very well designed CPU in terms of functionality and efficient use of its design (it is true the stack is a wee bit small for big languages like C or LISP, but that's okay.. 6502 assembler is simple enough.). To this day, I thank Chuck Peddle and Bill Mensch for creating such an accessible piece of silicon, and I find it very ironic that the CPU that revolutionised personal computing to the masses in the late 70s and early 80s was not even intended for computer use! (It was meant to be a microcontroller for embedded applications!)

As an Aside, I am working with Ben Heckendorn to fabricate an Atari 800 Laptop for my own use. I will post more information about it later, but for now, here is a picture. 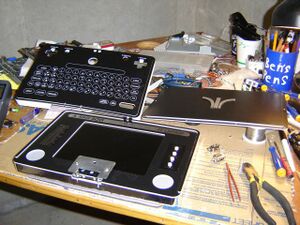 As time moved on, I was exposed to even more computers, so many I can't list them all. my memorable moments in the 8-bit era were the Commodore 64, and the Atari 800. (both machines had their strengths, fellas. and there are things in one that can't be done on the other.), and as 16 bit machines approached, we had an IBM PC 5150 in the house (which I considered primitive next to even my Atari 800.), as well as later an Atari 1040ST (which I would later use to build around my first Music studio.) .. my father also had gotten over the years, a NeXT cube, a Macintosh (and I had found a LISA much later.), and my personal favourite, the Commodore-Amiga (I have owned a 1000, 500, 2000, and a 4000). 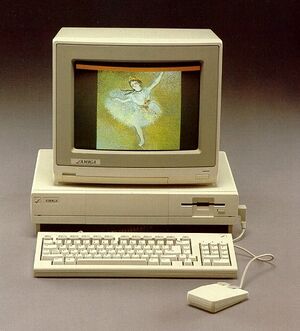 As the Amiga and Atari ST I was using faded from mainstream use to the more niche uses in my music doodlings.... I moved, kicking and screaming, to the PC Compatible world. Dragging out my Atari and Commodore 64 occasionally to use them for nostalgia.

As I was introduced to UNIX by my own exploration, I wanted a UNIX environment to run on my PC. In 1991, I had these choices:

I chose Minix, and ran it on my PC, for a short while.. It was cool, but I made the mistake of wanting it to be a complete UNIX. It just wasn't. Also the single synchronous IO thread was enough to drive me batty. meanwhile on comp.os.minix, I had found out about a little kernel being written called Linux, and downloaded a copy from funet. Wasn't much there yet... but I kept watch anyway, and watched the kernel grow up a ton. by the middle of 1992, I was bootstrapping my own copy atop minix with gcc and the binutils etc.

I really enjoyed Linux at first because, I could use it, it was stable, and I could poke around and see how things worked underneath when I was curious. The BSDs would eventually shake off their patent shackles and follow suit as time went on, and I tried them too, and enjoyed using them.

But I wanted other people to be able to enjoy the stability and power of UNIX as well, (maybe I was, and am asking for too much?).. And over the years, I tracked the development of Desktop environments for UNIX all the way to the current incarnations of GNOME/KDE/GNUstep/XFCE et al, and even participated as a volunteer tester for Eazel during the testing of Nautilus from the release of PR1 onwards to their final release 1.0.6 in April of 2001.

Many years would pass, and I would slowly shed my Windows environment entirely for Linux, and relegate my other computers slowly to storage. Linux has been my primary OS since 1999.

Today, I continue to track the progress of the free software community, and use the software as much as I can, contributing where I can.

My Connection with Music

Music has been the second parallel with my life. For as long as I can remember, I was always able to sing, and play melodies I had heard on the piano. I would later learn that I have absolute pitch, and would use that to mimick sounds and learn melodies that I would play on the piano, and make up my own compositions.

But I had a problem. I was born with cerebral palsy due to complications at birth, and was for a large portion of my early childhood, physically disabled. As a consequence, I had to undergo physical therapy from the time I was 6 months old, until I was 15.

My ability to play melodies on the keyboard, was limited by the dexterity of my hands, and I wanted to find a way around that.

I had started to read my father's music theory books to learn as much as I could about music, but I wanted to be able to play the melodies in my head.

My answer would come in a place I wasn't yet familiar with, a record store in Dallas, Texas called Bill's Records and Tapes, when I was 6.. in 1986.

As I had walked into the store, I heard a sound coming from the adjacent room where a DJ was spinning on a turntable. He was playing some of the most incredible and mesmerizing music I had ever heard up to that point. It was entirely electronic, robotic, and precise, and I was hooked on it.

I asked the DJ what it was. He said, "It's the new single from Kraftwerk... Musique-non-stop" I promptly bought a copy, and listened to it for hours on end, much to the annoyance of my parents. But I had wanted to learn how they created such music. I scoured every piece of information I could find, learned about sequencers, synthesizers, music software, and systematically built a studio from a NeXT, an Atari ST, an Amiga, and an old Fairlight CMI IIx which was on its way to be scrapped. and this formed the basis of my first studio, in 1990. As a result, I had learned about digital recording at a time when it was still very uncommon, and realised its non-destructive advantages.

I have since rebuilt the studio 6 times... each time getting smaller, more compact, more driven by software, until the latest incarnation in 2003, which is now driven entirely by free software.

I also developed a synthesizer fetish, buying and selling many different synthesizers over the years. My favourites have been: 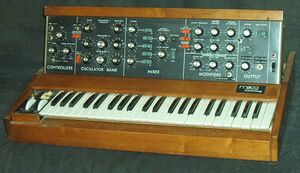 A Minimoog (replace with my old one)

I have also spent some time in front of a NED Synclavier (9600 with the direct to disk unit and NEWK) and found it to be amazingly powerful, even if the command language was a bit daunting. it was made up for by some of the most amazing output processing i've ever heard from a workstation (still nothing like it)

Synths I will never own again: A Polymoog (big, heavy, broken-prone, and just not that great of a sound), PPG Wave 2.3 (I can't afford the replacement parts!), a Mellotron (mechanical nightmare!!), Yamaha CS-80 (play 5 minutes, open cover, twiddle tune pots, play some more, twiddle, repeat until you fall over from a stress attack), EMS VCS3 (they're cool to look at, they're just too big of a pain in the ass to use for REAL WORK). 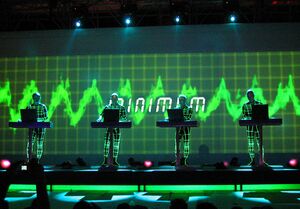 Musically, I live by a phrase once uttered by Ralf Huetter of Kraftwerk, and echoed by its former member, Karl Bartos:

Translated: "Music will always be a medium for new ideas." This echoes a belief of mine that art is central to the development of society and can both accentuate and bridge differences between cultures.

I also write infrequently, articles in a blog called Patterns and Compositions, discussing the context of electronic pop, an example article on the recursive nature of pop can be found here: http://tschak909.blogspot.com/

I am currently employed as a contractor serving a contract with Fidelity Investments doing Wiki-web development for their Registered Investment Advisor group. We are using MediaWIKI as well, and I am customising it for their needs, as well as training them on how to use it.

Until May of 2006, I was a founder of a functioning think-tank called Juntos Group. From 2000 until May of 2006, we developed solutions for a wide variety of clients, but I had to leave the company due to conflicts of personality.

I do my best to gently introduce corporations to the virtues of free and open source software where it makes sense to them in their infrastructure.

You may contact me via my talk page, or by sending me an email via the wiki.