XOlympics is an INTERNATIONALLY EPIC game for Sugar.

XOlympics will be a collection of arcade-style sports mini-games that can be played by two players simultaneously in a head-to-head mode. The games will be as simple as possible, consisting of two movable player characters, and an implement (ball). The purpose of most of the games will be to manipulate the ball using your character into a predefined "goal" on the edge of the screen. Greatness ensues.

We need to refactor the physics objects used in the scene so that we only draw moving objects every frame, because the XO laptop can't handle redrawing a large portion of the screen (things slow down too much). 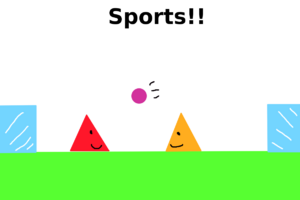