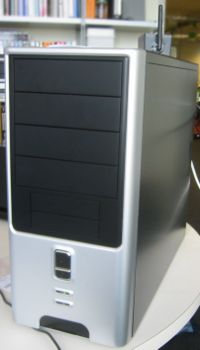 This is a server machine with a primary goal of supporting development of the School server/laptop software, including early trials. As this is a very limited production model (12-40 ?) and the design criteria are still undefined, flexibility wins out over cost. Off-the-shelf consumer PC hardware is being used. 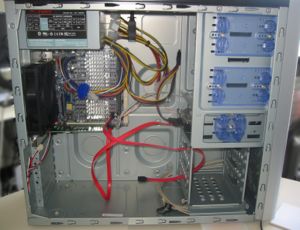 These are the particular components being used:

The mini-ITX form factor seemed to be the ideal in terms of meeting the requirements for relatively high processing power without a processor fan.

The Via EPIA EN12000EG is based around Via's C7 processor, w. matching chip set.

The Via EPIA CN10000EG is also based around Via's C7 processor, w. matching chip set.

This is the driver for the 1000base-T interface on the EPIA EN10000EG motherboards.

Side view of the XSX prototype school server.

With the motherboard sitting on the conductive foam it is shipped in, insert the DIMM.

Swap out the back panel on the case to use the one included with the motherboard. From the outside of the case, push in on the bottom of the old one to remove. You will have to bend up the new shield over the ethernet and PS/2 mouse connectors. If using the EN10000 MB, punch out the holes for the video connectors. Test the shield on the MB BEFORE placing it in the case!

Attach the motherboard using the brass standoffs included with the case and four screws. Be careful not to "slide" the motherboard into place, you are likely to scrape components off the underside.

Remove the back panel piece blocking the first slot (normally AGP, but used for PCI on mini-ITX). Place the NIC into the PCI slot and screw the back flange down.

The front panel switch cabling has to be rerouted up next to the mounts for 3.5 in. floppies in order to reach the MB.

Much more detail needed here. For now, assume that all defaults from the manufacturer are the same (not likely...)

In order to determine if problems are related to a particular supplier of a component, we must track the deployed components carefully. Here is the table where we store this information:

Where for Network interface cards: