This page describes a user study that was performed on April 8 and 10, 2008 by Patrick Dubroy in order to evaluate prototypes for a Pen Tablet UI.

Five participants were selected for the study. No participant was familiar with the XO hardware or the Sugar UI, nor did they have any experience with a conventional graphics tablet. [More details to come]

The number of participants was chosen based on Jakob Neilsen's rationale (Why You Only Need to Test With 5 Users) that this will find approximately 85% of the usability problems in a design. Given the early design stage, this seems like an appropriate approach.

Participants were asked to perform a several drawing tasks using the Think Aloud protocol. Before beginning the tasks, participants were given an opportunity to become familiar with the OLPC and get a feel for the use of the tablet. This warm-up period was also used to get the participants comfortable with using think-aloud.

During the drawing tasks, video of the screen and tablet area was captured along with audio. Afterwards, I reviewed the videos and made notes of any interesting results, behaviours, or comments.

In each task, the participant was given a paper drawing and asked to reproduce it on the XO screen using a specified drawing mode. For the first three partipants (C, S, and M), before opening touching the XO, they were asked to do a simple drawing on a piece of paper, something they imagine a 6 - 12-year-old might draw. They were later asked to recreate this drawing on the XO (see below). 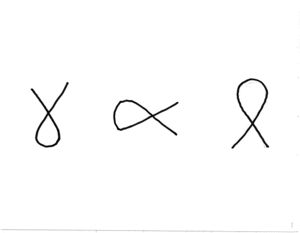 Before beginning the task, each participant was told that "the blue rectangle on the screen represents that area that the tablet is mapped to. So when you draw on the tablet, it will always appear inside the blue rectangle." Then participants were asked to reproduce this drawing using the Fixed mapping mode method. 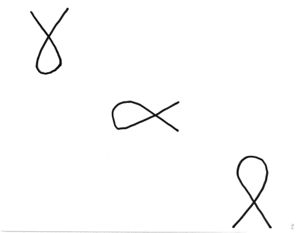 Participants were asked to reproduce this drawing using Fixed, Movable, and Dynamic mapping modes. The order that these modes were applied varied from participant to participant. Before each mode, they were given a short explanation of how that mode would work, but it was not demonstrated to them.

Before using Fixed or Movable (whichever came first), they were told about the XO's grab buttons, and told what they are used for ("panning around a document, like you can do in Google Maps"). They were not told whether to use the stylus or the touchpad for panning, nor were they told exactly what "panning" would mean (moving the paper or moving the rectangle).

Before using the other related mode (between Fixed and Movable) they were told that it would work in a similar, but slightly different way than the previous one, and that they should experiment to figure out how it worked.

When Dynamic mapping mode was introduced, the participants were told: "whenever you draw a line, you move the cursor to the point where you want the line to start. Then when you start drawing on the tablet, the line will appear beginning at the cursor." 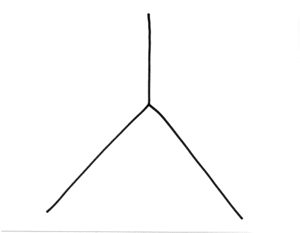 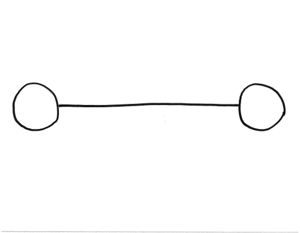 Participants were instructed to duplicate one of the images above, using both the Fixed mapping mode, and the Dynamic mapping mode. The order in which the modes were applied varied from participant to participant.

In addition, participants were asked to complete the drawing using three separate lines, rather than one continuous line.

Before using the Fixed mapping mode, they were told about the Alt-hover precision mode: "when you hold down Alt and draw on the stylus, instead of making a line, it will display crosshairs at the point where the stylus currently is."

Detailed notes from each participant:

Problems with the prototype

Problems with the study methodology

Problems with the hardware

There were a few issues with my study methodology, as noted above. Recommendations for a future study:

Recommendations for activities supporting the tablet