The B3 run was motherboards only. If placed in a case, they went into cases with the new (capacitive-only) touchpad. OLPC received fifteen of these in September, 2009. Eventually there were less than ten, and they have been withdrawn, so this page is no longer relevant.

Almost the same as a B2 motherboard:

The noticeable differences are: 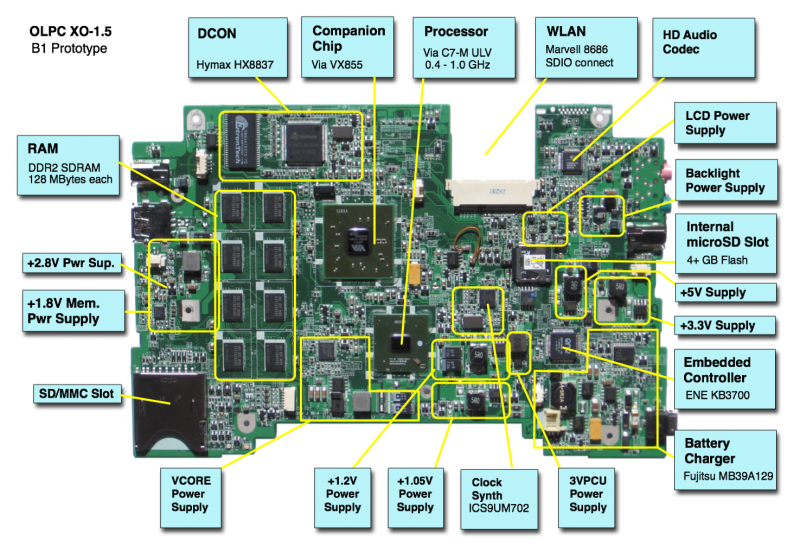 XO-1.5 use Q3xxx firmware releases. These will not work on an XO-1.

The currently known hardware problems are:

The lid switch is flaky at best, completely non-operational (lid always closed) at worst. Tracked as #9911. This is fixed in versions of firmware later than Q3A25.

The DC power input on B3s may reach 34W when running firmware earlier than Q3E15. With later firmware, the power draw is still 29W. There is an ECO which restores the laptop power to a 25W limit which should be applied to most B3 motheboards (in time).

The processor serial port situation on XO-1.5 is not optimal, as it shares pins with the camera interface. There is a connector (J4) located on the upper left hand side of the motherboard for +3.3V RS-232 connection (see the pinout and the connector/jumper locations), but its use must be enabled using a jumper or a serial adapter wired correctly (pin 1 tied to GND through a 1K resistor.)

To use the serial port you will have to either short PR148 or short pins 1 and 3 on the SERIAL ENABLE jumper (JP1). PR148 is a large power resistor located near the processor serial port (see the XO-1.5 B2 connector locations). JP1 is located right behind the processor serial port. Be aware that there is a test pad located next to the jumper block that erroneously looks like the pin 1 indicator. Pins 1 and 3 are the two pins closest to the memory chips.

If the SERIAL_ENABLE jumper is set, the camera in-use LED will remain lit. This will not be fixed (Trac ticket #9385).

Supporting documentation for these boards are (in PDF):