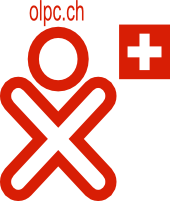 There are 4 national languages in Switzerland. English (which is not a national language) is probably the best way to reach the largest audience. That is the reason why we publish in English here.

In June 2008, the non-profit association One Laptop Per Child Switzerland was founded in Bern, Switzerland. To become a member, start by subscribing to the mailing list and send us an email to introduce yourself to the rest of the community.

Here is a short video about olpc.ch recorded at the Swiss Day of computer science (August, 29th 2008) [Play Video]

For the official list of our objectives, please refer to article 3 of our new statutes (in French only). Our objectives include the promotion of Information and Communication Technologies (ICT) for Education (in French : TICE).

Our Flyer (also Flyer in German as RTF and Flyer in French as PDF) is a handy summary you may find of interest. More generally speaking, we also aim at participating in the OLPC Europe group, and share the OLPC_Europe/Vision. See also this video (in French) where Michael Vorburger of OLPC.ch speaks about the XO and OLPC Switzerland.

How can I get involved?

If you are interested in following the olpc.ch grassroots movement, interested to participate in OLPC Switzerland, please do join our olpc.ch mailing list, by subscribing at http://lists.laptop.org/listinfo/olpc-ch. When you subscribe, it would be nice if you could briefly introduce yourself via an email to the list. We archive the olpc-ch list for you to read what we have been up to before you joined.
Archives 1|2|3|4

Make a donation to olpc.ch

Visit us at an upcoming event

Where can I get a XO?

The question most often asked by individuals is Where can I get an XO laptop in Switzerland?

If you are the representative of an educational institution, public or private, please send your questions and requests to Michael Lew (michael@olpc.ch).

What has already happened in Switzerland?

A selection of Past Events (in construction)

Activities, OLPC projects - from the community of interest in Switzerland

Where can I find further information?

If you are a journalist in Switzerland, please do subscribe to our mailing list and introduce yourself. We would love to give you a demo (e.g. in Bern, or Lausanne; or elsewhere) of the innovative XO laptop, and share some of our enthusiasm with you... and maybe you would like to write about the OLPC movement, the XO education project, and OLPC Switzerland?