The viewpoints expressed hereunder do not necessarily reflect the opinion of OLPC.
This page was created by a member of the free volunteer community supporting OLPC. 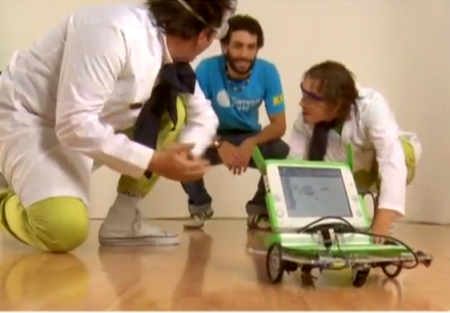 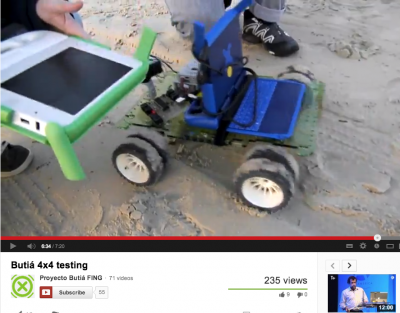 A combination of LEGO Digital Designer and Lego Mindstorms [1] could allow to design and program virtual robots.

An interesting goal for expert users (e.g. to pass an exam) could be to create a factory that built other robots.

A small number of actual hardware robots (e.g. one) could create motivation (through "artificial" scarcity) for pupils to want to be allowed to work with the hardware robots. Robot games like Robot Odyssey [2] could be used as qualification and for mentoring purposes: Pupils are motivated to solve the game as qualification, as entertainment and because a mentor offers support and encouragement in solving the puzzles in the game. A mentor would probably need guidance in how to help a pupil to solve puzzles him - or herself, not through solutions given by the mentor. A Journal entry stating that the game had been solved could be required to run the software that allowed to program actual robots.

Butiá aims to create an inexpensive educational platform to teach robotics and computer science with the XO computer. Students can program their own robot using the existing activities in the XO computer like Tortugarte, Pippy, Chat and in the near future Scratch and others. The kit consist in a acryl platform wich the XO sits on and connect with motors and sensors. It's designed to promote a constructive use, permiting to select where to put sensors in the plataform using perfored pieces in the kit. The project is perform by the Computer institute of the Universidad de la Republica and it could be done thanks to the support of the ANII

In this image you can see a program that tries to avoid obstacles, detect the white line to avoid falling from the dojo and stops when a magnet is near the robot.

here you can see the tortugarte example presented in action

Minibloq is a graphical programming environment for Arduino and other Arduino-compatible boards, such as DuinoBot. It's currently under development. One of it's main goals is to bring closer the Arduino and the Multiplo platforms to the primary and secundary schools.