Profiles of OLPCers, including mentors, interns, and... you?

To add your own profile below, append the following at the bottom of the inclusion page:

Then create a profile for yourself at Profiles/YOURNAME (by following the resulting redlink). You can start your profile by pasting {{subst:profile-info}} into the new page.

Michael was recruited in the summer of '07 to realize parts of Bitfrost. He is presently occupied with the task of driving OLPC releases.

About: avid practitioner of synchronized flamethrowing.

Chris has been with OLPC since mid 2006. He wrote the sugar activities Pippy and Words, was part of the team who developed WikiBrowse, and maintains OLPC's "ohm" power manager.

I pick up stuff I find on the ground and make it work.

Daf works on Sugar's communications infrastructure as part of the Collabora team. He loves to see people building shared activities for the XO.

Collabora Ltd. is a software consultancy contracted by OLPC to assist with the design and implementation of OLPC's Presence and real-time Collaboration goals. Here is its current work statement.

Collabora employs some great folks like Daf, Guillaume, and Sjoerd. It is directed in part by Rob McQueen. Michael is Collabora's OLPC Liaison.

Bryan works for OLE Nepal as a systems administrator. He has been involved in OLPC since summer of 2006 and is focused on Nepal's deployments.

Morgan formerly worked for Collabora, and has worked on contract for World Wide Workshop Foundation and OLPC. He has worked on Presence Service (including the sugar.presence API), Chat, Read, HelloMesh, Connect, Poll Builder and Story Builder.

Projects: Grassroots, Repair centers, Jams, and a long list of others.

Mel is an itinerant hack of all trades who can juggle and solder surface-mount chips, and is working on being able to do both simultaneously. Works within grassroots, electrical/software engineering (support/QA at 1cc), (engineering) education, and sociology (focused on academic cultures). More narcissism is available here.

Projects: XO_Solar, Aymara Fest, the list for OLPC discussion in Spanish, and all things ICT4D Bolivia

Messing with OLPC since January 2008, Yama has managed to use his journalist dirty tricks to bug everyone within reach with requests for full disclosure and user-developer communication, and TUE, this later being something nobody has ever heard of or ever wants to. Currently in Austin, Texas, on his way to Bolivia. Runs bolinux.org, which has been accurately described as a one-man Linux community

Joined the development team since 2007 June.

Research and Development for Education and Technology

Christoph is a computer-science student at the Vienna University of Technology but he spends most of his time on olpc related activities. Among other things he is the co-author of the Activity handbook, holds presentations on OLPC and is the co-editor at olpcnews.com. 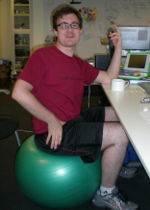 Motto: Specialization is for insects 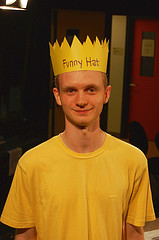 Daniel is currently working on the Paraguayan deployment efforts from the city of Asunción. He previously visited the deployment in Ethiopia after completing a summer internship at OLPC HQ in Boston.

Paul works on embedded and platform- level aspects of the project, and has done similar work on other linux-based handhelds (though none so green as the XO!) in the past.

Paul has traveled extensively, enjoys motorcycling, canoing, hiking, tinkering, and programming (both for fun and profit). He's a long-time unix and embedded systems programmer, and is the original author of vile, and the current maintainer of RoadMap.

Mitch joined OLPC in 2006. He is responsible for the boot firmware and also helps out with various aspects of hardware design and debugging. His hobbies include golfing, building golf clubs, building surfboards, and herding goats.

Bobby is an intern working on bringing System Dynamics to the XO with his activity Model. His other passions include education and energy issues.

Deepak joined OLPC in June of 2008 to work on all things related to the Linux kernel...drivers, power management, file systems, etc. Prior to OLPC Deepak worked for an embedded Linux OSV for several years hacking on ARM board ports, drivers, and maintaining a vendor kernel tree.

Outside of computing, Deepak's interests include biking, traveling the world, thinking about sustainability, and cooking with fresh local ingredients.

Volunteer of many trades - primarily grassroots organizing, but (hopefully) moving into hardware development. Head of the Olin university chapter.

Wiki, Support-gang, testing, repair-center, devel, and for even more details .

Currently volunteers most of his time to local and international non-profits, (60 - 80 hrs / month). Squeezes-in enough income (mostly via telecommute projects), to pay for expenses, and asks for nothing more. :]

A computer-science graduate of Western Washington University (WWU) in Bellingham, WA along with spending most of his life there. Worked for Microsoft in late 1980's as a product support co-op/intern for Macintosh Applications. Starting early 1990's worked for WWU as IT consultant, which eventually evolved into Housing Info Technology Services (HITS) Manager for University Residences (> $1 Million budget, 10 staff, 100+ workstations, etc.). In 2005, decided to leave the corporate '9-6' (50-60hr/week) responsibilities. Scaled down consumption, to be able to leave 'low to the ground' at less than $24K per year via "sustainable green living practices". Has solar panels, wind mills, conserves water/gas/electricity, green power, Zero Waste, eWaste Management, reduce/reuse/recycling, etc.. Avid supporter of FOSS especially: Ubuntu, OpenSuSe, and LAMP. Avid supporter of listening to new ideas, and creating unique agreeable solutions to conflicted issues.

Sayamindu helps with localization and internationalization efforts of Sugar and the related activities. Currently, he also takes care of the keyboard layouts and input mechanisms. Sayamindu wrote the ImageViewer activity, and maintains Terminal and Read and is also responsible for the book reading related bits of OLPC. He works out of India, and has been around with OLPC since late 2007.

Projects: Besides what's on my OLPC wiki user page, I co-manage the OLPC Learning Club in Washington, D.C.

I have been a sponsor of the MIT Media Lab for the last several years through my day job at a large non-profit organization. It was there at the lab that I came to be involved with OLPC as Nicholas and Walter moved over to the spinoff association. I hope to find ways to use the XO to connect generations young and old.

In February 2013, as part of a USAID/WorldVision All Children Reading Challenge Grant, I worked at a children's library in Lusaka, Zambia for almost three weeks teaching multimedia programming in Squeak Etoys to vulnerable youth using OLPC XO laptops.

-Student at BYU in Provo, UT
-Summer 2008 Intern in Mongolia

I work on a variety of Sugar activities in my spare time.

I'm happy to help anyone out with activity development.

I'm getting to know the OLPC and looking to find where I can best contribute. More news as it happens.